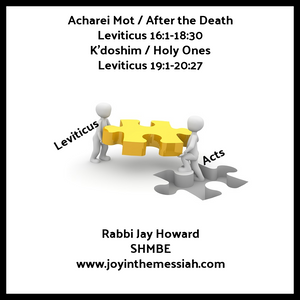 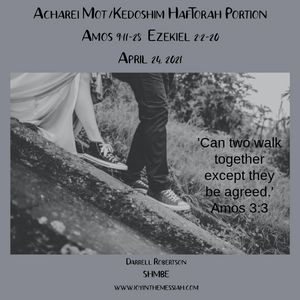 In this double parshat, one of the first things we read is the detailed instruction concerning Yom Kippur. Acharei Mot continues with seemingly unrelated topics regarding several things, such as the forbidding of consuming blood, and a list of unlawful sexual relations. Kedoshim lists various laws including a recap of the commands and more character instructions. Chapter 20 continues again with various laws, including Leviticus 20:7-8 which sets Gods people apart: ‘‘Consecrate yourselves and be holy, because I am the Lord your God. 8 Keep my decrees and follow them. I am the Lord, who makes you holy.’ This verse not only exemplifies who we are but whose we are. This is the foundation for the instructions that God gives His people.
For the believer that has not studied Torah, or believes that the ‘law was done away with’ these strange regulations probably seem completely out of consideration for our modern lives. Outside of the obvious ethical principles of forbidden sexual relationships, which is unfortunately debatable in some circles; what possible relevance do these seemingly old ritual concerns have for us today?
In the days of the Apostles, something happened that had really never happened before, especially on the scale that the Apostles began to see. John 12:20-22 shows us the beginning of the message of Yeshua going forth to the nations: ‘Now there were some Greeks among those who went up to worship at the festival. 21 They came to Philip, who was from Bethsaida in Galilee, with a request. “Sir,” they said, “we would like to see Yeshua.” 22 Philip went to tell Andrew; Andrew and Philip in turn told Yeshua.23 Yeshua replied, “The hour has come for the Son of Man to be glorified. 24 Very truly I tell you, unless a kernel of wheat falls to the ground and dies, it remains only a single seed. But if it dies, it produces many seeds. 25 Anyone who loves their life will lose it, while anyone who hates their life in this world will keep it for eternal life. 26 Whoever serves Me must follow Me; and where I am, My servant also will be. My Father will honor the one who serves Me.’
Through the teachings of Rabbi Shau’l the Goyim began flocking to the Messiah Yeshua. A great number of the nations had begun attaching themselves to the God of Israel through faith in the Jewish Messiah. Prior to this point of time, Gentiles who came near to the God of Israel were expected to undergo a formal conversion to become Jewish in order to complete their journey of faith. After all, how does a person explain that their religion is Jewish if they are not? The Jewish religion was the religion of the day, run by the Rabbis, which Rabbi Shau’l used to be a part of.
In Acts 15, the Apostles were confronted with large amounts of people coming into the Way. Did these Gentiles need to fully convert and become Jewish in order to be a part of this ‘new’ Jewish religion or not? There was much debate as we are shown in Acts 15:1-5 ‘Certain people came down from Judea to Antioch and were teaching the believers: “Unless you are circumcised, according to the custom taught by Moses, you cannot be saved.” 2 This brought Paul and Barnabas into sharp dispute and debate with them. So Paul and Barnabas were appointed, along with some other believers, to go up to Jerusalem to see the apostles and elders about this question. 3 The church sent them on their way, and as they traveled through Phoenicia and Samaria, they told how the Gentiles had been converted. This news made all the believers very glad. 4 When they came to Jerusalem, they were welcomed by the church and the apostles and elders, to whom they reported everything God had done through them. 5 Then some of the believers who belonged to the party of the Pharisees stood up and said, “The Gentiles must be circumcised and required to keep the law of Moses.”
They definitely could not remain like they were, because their pagan practices which is the opposite of Torah and Yeshua. In order to find the answer for the situation, the Apostles looked to the Torah, which corresponds to this parsha. They found a series of passages that were directed toward both “the native or the stranger who sojourns among you.” They found that within these passages there was the understanding to help the Goyim begin their journey in joining to the God of Israel. This was a baseline of Torah-instructions for their inclusion.
After debating all things, James, the brother of the Master and the head of the Council of Jerusalem, made a formal declaration giving these new believers of Yeshua a list of what appears to be four prohibitions: Acts 15:13-21: 13 When they finished, James spoke up. “Brothers,” he said, “listen to me. 14 Simon has described to us how God first intervened to choose a people for his name from the Gentiles. 15 The words of the prophets are in agreement with this, as it is written: 16 “‘After this I will return and rebuild David’s fallen tent. Its ruins I will rebuild, and I will restore it, 17 that the rest of mankind may seek the Lord, even all the Gentiles who bear My name, says the Lord, who does these things’ 18 things known from long ago.19 “It is my judgment, therefore, that we should not make it difficult for the Gentiles who are turning to God.’ 20 Instead we should write to them, telling them to abstain from food polluted by idols, from sexual immorality, from the meat of strangled animals and from blood. 21 For the law of Moses has been preached in every city from the earliest times and is read in the synagogues on every Sabbath.”
We can see the correlations in Acharei Mot/Kedoshim:

There will be a lack of understanding  when one just studies the Brit Chadasha, or as now termed, the New Testament. The puzzle piece has to fit, and we see this with Leviticus to Acts.  From Genesis to Revelation – One Book, One Torah, One Messiah, One God. 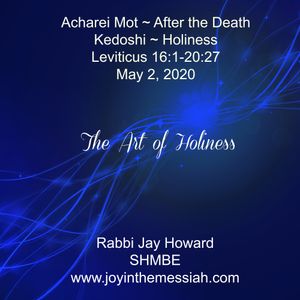 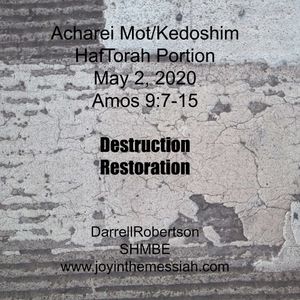 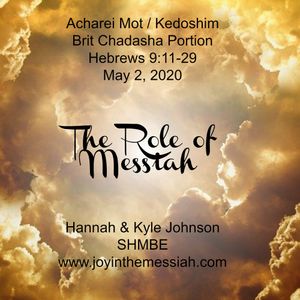