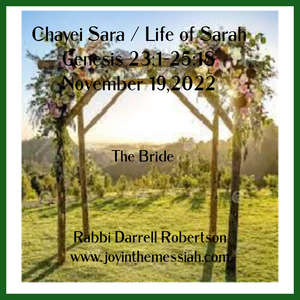 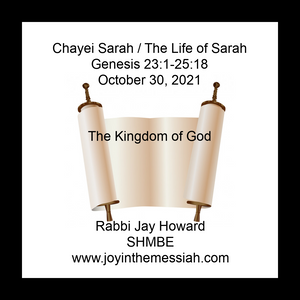 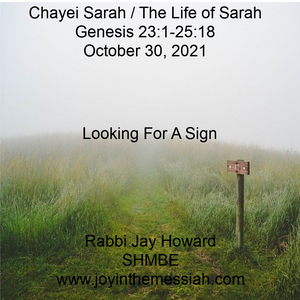 This parsha opens with the death of Sarah. Which is an interesting point as it is called Chayei Sarah - the ‘life’ of Sarah. ‘Sarah lived one hundred and twenty-seven years; these were the years of the life of Sarah. 2 So Sarah died in Kirjath Arba (that is, Hebron) in the land of Canaan, and Abraham came to mourn for Sarah and to weep for her.’ Genesis 23:1. Or maybe it's not so strange. Because in this parsha people react to Sarah's death, a testament to how much power the dead have in those living. They seem to miss her deeply, as we witness in Genesis 24:67 ‘Then Isaac brought her into his mother Sarah’s tent; and he took Rebekah and she became his wife, and he loved her. So Isaac was comforted after his mother’s death.’ Sarah obviously had a profound impact on the people around her.
In the following chapters, Abraham speaks to the sons of Heth, requesting a place of burial. He asks for the cave of Machpelah at the full price. However, Ephron the Hittite responds by telling Abraham he will give him the field and the cave.  Abraham again, requests that he purchase the cave instead of a gift, which the request is finalized, Genesis 23:5-19.
Why is this important? Because it represents ownership. This was the first parcel of land owned by the Hebrews in the Promised Land. Abraham, Isaac, Jacob, Sarah, Rebekah and Leah are buried there. Interesting to note, that Ephron is spelled differently, without a ‘vav’ (“עֶפְרֹן is spelled without a “vav,” because he promised much but did not do even a little” Rashi’s commentary).  Ephron’s name is intentionally misspelled.
Genesis 24 continues with a bride for Isaac.  Genesis 24:1-3 has an interesting concept: ‘Now Abraham was old, well advanced in age; and the Lord had blessed Abraham in all things. (This statement relates to his son, Isaac most importantly) 2 So Abraham said to the oldest servant of his house, who ruled over all that he had, “Please, put your hand under my thigh, 3 and I will make you swear by the Lord, the God of heaven and the God of the earth…’ Why under the thigh? Rashi’s comments: “Since one who swears must take with his hand an article related to a mitzvah such as a Torah scroll or Tefillin, and circumcision was his first mitzvah, and he had fulfilled it with pain, it was dear to him; so he took it.”
It’s interesting in Genesis 24:10 that the servant took ten of his master’s camels. The number 10 is an important number in Scriptures and in Hebrew.  It is often said that the number ten is a symbol of perfection, harmony and creation.
God promised Abraham He would not destroy Sodom if 10 righteous men could be found there, Genesis 18:32. It also represents the Ten Utterances/Words found in Exodus 20. We see the ten elders of Israel in Ruth 4:2.
There are the 10 phrases of Genesis - the phrase “God said” appears 10 times in Genesis 1. We know of the 10 scattered tribes of Israel.  There are the 10 horns with 10 crowns in Revelation 13:1. In Revelation 17:12 the 10 horns which now represent 10 kings. The 10 plagues of the Exodus, Exodus 7:14-12:30.  There were ten generations that lived up to the flood, Noah was the 10th. There were 10 virgins, Matthew 25:1-13; there were 10 lepers; Luke 17:11-19, there were 10 talents; Matthew 25:14-30. In 2 Kings 20:8-11 God caused the shadow on a sundial to go backwards 10 degrees. In the Temple were 10 lavers, 10 lampstands, and 10 tables; 2 Chronicles 4:6-8.
On the 10th day of the first month, a lamb was to be chosen for Passover; Exodus 12:2-3. There were 10 servants given each 10 minas (amount of money) in Luke 19:12-13. There were exactly 10 “I AM’s” spoken by Yeshua in the book of John – “I am the bread of life, I am the bread of life which came down from heaven, I am the living bread, I am the light of the world, I am one that bears witness of Myself, I am the door of the sheep, I am the good shepherd, I am the resurrection and the life, I am the way, the truth and I am the true vine.”
Genesis 24:11 continues as the servant brings the camels to a well of water. The servant doesn’t pray for himself, but rather for his master Abraham, to show kindness to him. He asks for a sign, that the woman will not only serve him water, but also the camels.  The end of this request is again for his master, ‘And by this I will know that You have shown kindness to my master.’ Genesis 24:14. When the scene is finished, the servant bows his head and worships The LORD in Genesis 24:26-27- ’Then the man bowed down his head and worshiped the Lord. 27 And he said, “Blessed be the LORD God of my master Abraham, who has not forsaken His mercy and His truth toward my master.’
The servant had an opportunity to pray that he himself would find someone for Isaac. That would probably relieve great anxiety on his part. But he prayed that God show kindness to Abraham, to someone else. Proverbs 3:3-4 ‘Let not mercy and truth forsake you; bind them around your neck, write them on the tablet of your heart,
4 And so find favor and high esteem in the sight of God and man.’
This parsha closes with Abraham taking Ketura (Hagar) as his wife and having more children. Genesis 25:5-6 states that Abraham gave all that he had to Isaac, but gave gifts to the sons of the concubines. The sages state that the Hebrew word for concubine is misspelled, missing the ‘yud’ thus denoting that it is singular, meaning just Hagar/Ketura and that Abraham did not have other concubines.  Keturah, Abraham's "other wife" after Sarah, is referred to as a concubine in 1 Chronicles 1:32. We're not told of any other women who would have been considered Abraham's concubines.
Chayei Sarah closes with the death and burial of Abraham and the genealogy of Ishmael and Isaac. 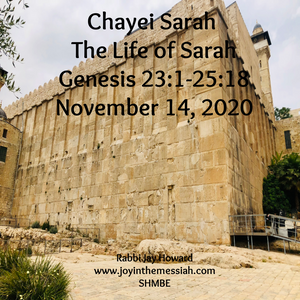 This Torah portion teaches us about serving, being a bride and a well of living water. Chayei Sarah opens with the death of Sarah and Abraham buys a field and buries his beloved wife, ‘Abraham agreed to Ephron’s terms and weighed out for him the price he had named in the hearing of the Hittites: four hundred shekels of silver, according to the weight current among the merchants.’ Genesis 23:16. ‘Afterward Abraham buried his wife Sarah in the cave in the field of Machpelah near Mamre (which is at Hebron) in the land of Canaan. 20 So the field and the cave in it were deeded to Abraham by the Hittites as a burial site.’ Genesis 23:19-20.
In Genesis 24, Abraham sends his senior servant, back to his land to get a wife for Isaac, ‘…but will go to my country and my own relatives and get a wife for my son Isaac.’ Genesis 24:4. The servant prayed to Elohim that there would be a sign given in regards to the wife that was to be for Isaac.  The sign was serving him at the well.
Genesis 24:19-21 ‘After she had given him a drink, she said, “I’ll draw water for your camels too, until they have had enough to drink.” 20 So she quickly emptied her jar into the trough, ran back to the well to draw more water, and drew enough for all his camels. 21 Without saying a word, the man watched her closely to learn whether or not the Lord had made his journey successful.’ Genesis 24:26-27 ‘Then the man bowed down and worshiped the Lord, 27 saying, “Praise be to the Lord, the God of my master Abraham, who has not abandoned his kindness and faithfulness to my master. As for me, the Lord has led me on the journey to the house of my master’s relatives.’
She was to be the bride, a serving bride to be found at a well of living water.

The Bride:
2 Corinthians 11:2 ‘For I am jealous for you with godly jealousy. For I have betrothed you to one husband, that I may present you as a chaste virgin to Messiah.’
Ephesians 5:27 ‘that He might present her to Himself a glorious church, not having spot or wrinkle or any such thing, but that she should be holy and without blemish.’
Revelation 19:7 ‘Let us be glad and rejoice and give Him glory, for the marriage of the Lamb has come, and His wife has made herself ready.’

To Serve:
Deuteronomy 11:13 ‘So then, obey the commands that I have given you today; love the Lord your God and serve Him with all your heart.’
John 12:26 ‘Whoever wants to serve Me must follow Me, so that My servant will be with Me where I am. And my Father will honor anyone who serves Me.’
Psalm 119:10 ‘With all my heart I try to serve you; keep me from disobeying Your commandments.’
1 Samuel 12:24  ‘Obey the Lord and serve Him faithfully with all your heart. Remember the great things He has done for you.’
1 Timothy 1:12 ‘I give thanks to Yeshua HaMashiach, who has given me strength for my work. I thank Him for considering me worthy and appointing me to serve Him.’
Psalm 113:1 ‘Praise the Lord! You servants of the Lord, praise His name!’