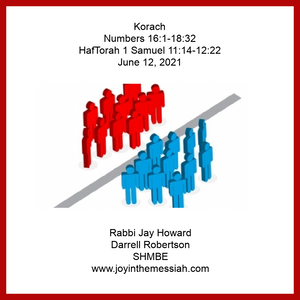 The wounds of a friend are faithful, but the kisses of an enemy are deceitful. Proverbs 27:6

Korach.  The infamous character in this Torah portion, aptly named after him.  Korach, a Levite which was the line of the Aaronic Priesthood.  He deceives himself and thrusts an influence into the camp that caused the death of hundreds, including him.  ‘And Korach took…’ is in the opening paragraph of this parshat which is in interesting way to describe his influence.  He took the minds of others by manipulating and persuading them that he was right. Korach, Datan and Abiram rise up against Moshe, Aaron and God, playing on the emotions of others, convincing their flesh. They felt elevated and vindicated by Korach, as sort of mob mentality which led to their demise as did all rebellions.
The name Korach comes from the root ‘ice, frost’ karachk.  Frost at any time of year will stunt or stop growth on a plant, and ice as we know, completely damages a plant.  Since we are referred to as grass of the earth and grass of the fields,  Job 5:25, Isaiah 40:6-7, Deuteronomy 32:2 and 1 Peter 1:24-25, the influence of Korach stopped the spiritual growth of those he came in contact with.  His influence overpowered their thoughts and ability to rationalize.
The opposite of the character or trait of Korach, Ice/Frost is Yeshua which is likened to Light, Life, and Truth. Korach freezes and kills, Yeshua breathes life.
As all influences that are birthed out of jealousy, the ending was grim as each faction of the rebellion had its own agenda. They were only united in opposing Moshe and Aaron. ‘The enemy of my enemy is my friend, but only as long as he is the enemy of my enemy.’ They defined themselves by what they were against, not what they were for.  This is the influence of self, the influence of ‘me, myself and I’.  Murmuring, jealousy, anger, and pride – based explicitly on ‘self’.
Language is significant, as in the opening ‘He took…’  It is also significant in Numbers 16:2-3 where we read that they rose up against Moshe /vayaqumu/ which is combined with ‘against’ him / vayiqahalu/.  These two Hebrew words together imply that they were rising up to establish their own kahal/congregation.
After Korach’s failed rebellion and death, God commands Eelazar to plate the altar with the bronze firepans of the two hundred and fifty tribal leaders in Numbers 17:36-38. ‘Then the Lord spoke to Moses, saying: 37 “Tell Eleazar, the son of Aaron the priest, to pick up the censers out of the blaze, for they are holy, and scatter the fire some distance away. 38 The censers of these men who sinned against their own souls, let them be made into hammered plates as a covering for the altar.
But didn’t Bezalel already plate the altar in bronze as God commanded when it was first built as we read in Exodus 27 and 38?  Yes, so is this contradictory?
There have been several commentaries regarding the plating of the bronze altar. Many scholars, including Rashi, assume that Numbers 17:1-5 is referring to a second bronze plating, covering the first one.  God gives the reasoning in Numbers 17:38-40 ‘Because they presented them before the Lord, therefore they are holy; and they shall be a sign to the children of Israel.” 39 So Eleazar the priest took the bronze censers, which those who were burned up had presented, and they were hammered out as a covering on the altar, 40 to be a memorial to the children of Israel that no outsider, who is not a descendant of Aaron, should come near to offer incense before the Lord, that he might not become like Korah and his companions, just as the Lord had said to him through Moses.’
The Korach rebellion was an unholy alliance of individuals and the ‘princes’ that were unhappy with Moses’ leadership. There were the Reubenites, Datan and Aviram, who resented the fact that the key leadership positions were taken by Levites rather than members of their own tribe. They murmured against Moshe in Numbers 16:13-14 ‘“We will not come up! 13 Is it a small thing that you have brought us up out of a land flowing with milk and honey, to kill us in the wilderness, that you should keep acting like a prince over us? 14 Moreover you have not brought us into a land flowing with milk and honey, nor given us inheritance of fields and vineyards. Will you put out the eyes of these men? We will not come up!’
Korach had been with Moshe since the beginning,  and was his cousin. They were part of a bigger picture, part of the redemption of the release of slavery and bondage.  They were soon to step into new life. And yet, the negative influence that began in prior Torah portions consumed these men.
Proverbs 18:24 ‘A man of many companions may come to ruin, but there is a friend who sticks closer than a brother.
Proverbs 16:28 ‘A dishonest man spreads strife, and a whisperer separates close friends.’
Proverbs 12:26 ‘One who is righteous is a guide to his neighbor, but the way of the wicked leads them astray.’
Proverbs 27:9 ‘Oil and perfume make the heart glad, and the sweetness of a friend comes from his earnest counsel.
Proverbs 20:19 ‘Whoever goes about slandering reveals secrets; therefore do not associate with a simple babbler.’
1 Corinthians 15:33-34 ‘Do not be deceived: “Bad company ruins good morals.” Wake up from your drunken stupor, as is right, and do not go on sinning. For some have no knowledge of God. I say this to your shame.’
These negative influences of which we are warned against are in Jude 10-11.  ‘But these speak evil of whatever they do not know; and whatever they know naturally, like brute beasts, in these things they corrupt themselves. 11 Woe to them! For they have gone in the way of Cain, have run greedily in the error of Balaam for profit, and perished in the rebellion of Korah.’
Jealousy, anger, rage, greed and rebellion are influences that bring death. Proverbs 13:29 ‘Whoever walks with the wise becomes wise, but the companion of fools will suffer harm.’ 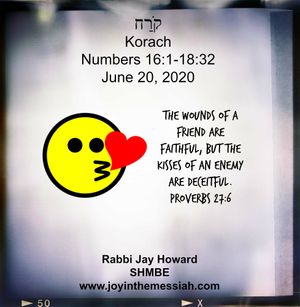 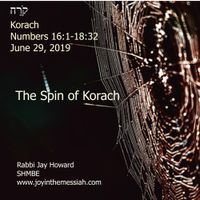 May you be blessed as you study Korach~ Rabbi Jay Howard