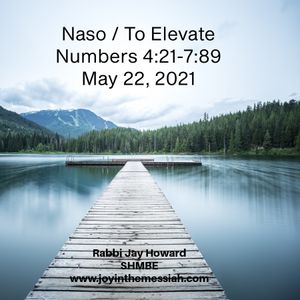 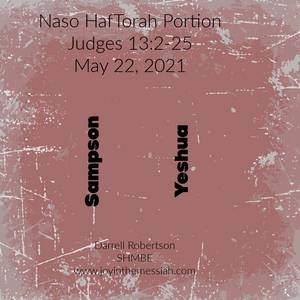 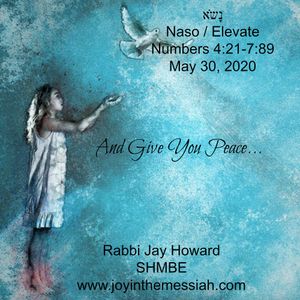 This Torah portion, Naso seems to be an accounting of unrelated items. First there is the account of the Levitical families of Gershon and Merari and their jobs in carrying parts of the Tabernacle when the Israelites journeyed. Then, after the instructions concerning the removal of unclean people from the camp including confession and restitution, there is the law regarding the unfaithful wife.
Chapter 6 begins with the law of the Nazarite vow where a person voluntarily and usually for a certain amount of time adheres to special holiness restrictions, including a separation from wine, grape products, the cutting of hair,  and contact with a dead body.
This is immediately followed with one of the oldest prayers in the world still in use in Synagogues and Christian churches alike; the Aaronic Blessing.  Right after the blessing is the detailed account of the offerings of the leaders of the twelve tribes for twelve days at the dedication of the Tabernacle, repeated twelve times, with each leader bringing an identical offering. This might seem redundant spending so much time describing an event that could have been stated once.  The key answer lies in the last word of the priestly blessing: shalom, peace.
The Spanish Jewish commentator Rabbi Isaac Arama explains that shalom does not mean merely the absence of war or strife. It means completeness, perfection, the harmonious working of a complex system, integrated diversity, a state in which everything is in its proper place and all is at one with the physical and ethical laws governing the universe.  Isaac Abrabanel writes, “That is why God is called peace, because it is He who binds the world together and orders all things according to their particular character and posture. For when things are in their proper order, peace will reign.”
In Genesis God brings order out of tohu va –vohu, chaos, thus creating a world here everything has its place. Peace exists as a whole.  The concept of peace as a constant through God is woven throughout the Scriptures, with God being the common thread.  Without God, Torah and Yeshua, there is no peace.
Peace in in Yeshua:  John 16:33’ I have said these things to you, that in Me you may have peace. In the world you will have tribulation. But take heart; I have overcome the world.”
Peace is Him: 2 Thessalonians 3:16 ‘Now may the Lord of peace himself give you peace at all times in every way. The Lord be with you all.’
He keeps us in peace: Isaiah 26:3 ‘You keep him in perfect peace whose mind is stayed on you, because he trusts in you.’
Torah brings peace:  Psalm 119:165 ‘Great peace have those who love your law; nothing can make them stumble.’
Baruch HaShem~

This Torah portion continues with the counting of the Israelites and the transporting of the Tabernacle. Naso also contains the laws concerning the adulterous wife and the Nazarite vow.  In chapter 6 are the instructions to bless the people of Israel and Naso concludes with the leaders of the twelve tribes of Israel each bringing their offerings for the inauguration of the altar.  It is interesting that even though their gifts are identical, they are brought on different days and each gift is individually described.
We see Naso in the Prophets and the Renewed Covenant concerning some major points.
Ephraim is compared to the wayward wife in the book of Hosea as we have committed adultery by accepting other religions besides the Torah of God. We have strayed and become the harlot.  Yeshua in John 8:1-11 has a confrontation with the Pharisees regarding an adulterous woman where He brings to light not only the consequences, but the dust of the earth and the metaphor of judging.
Numbers 5:16 - ‘And the priest shall bring her near, and set her before the Lord.  The priest shall take holy water in an earthen vessel, and take some of the dust that is on the floor of the tabernacle and put into the water.’
Jeremiah 17:13 ‘O Lord, the hope of Israel, all who forsake You shall be ashamed. Those who depart from Me shall be written in the earth, because they have forsaken the Lord, the fountain of living waters.”
John 8:6- ‘This they said, testing Him, that they might have something of which to accuse Him. But Jesus stooped down and wrote on the ground with His finger, as though He did not hear.’
Yeshua refers to the prophet Jeremiah, completely reversing the consequences of sin in regards to the woman that was brought before Him. He now places the sin upon those that judge.
The vow of the Nazir is a vow of separation, Numbers 6.  Judges 13 begins the Nazirite vow of Samson and is again in the book of Acts when Rabbi Shaul begins the Nazarite vow. They do not shave their heads after the vow has begun and they do not eat anything from the grape vine, and neither do they come into contact with anything that is dead. "So Paul still remained a good while. Then he took leave of the brethren and sailed for Syria, and Priscilla and Aquila were with him. He had his hair cut off at Cenchrea, for he had taken a vow. And he came to Ephesus, and left them there; but he himself entered the synagogue and reasoned with the Jews. When they asked him to stay a longer time with them, he did not consent, but took leave of them, saying, “I must by all means keep this coming feast in Jerusalem; but I will return again to you, God willing.” Acts 18:18-21.
The blessing in chapter 6 which is the Aaronic Blessing is an integral part of every synagogue and should be in every life.  God instructs this priestly blessing to be over His people, and then He states that they (Aaron and sons – the priests) shall put His name on the children of Israel, and then He will bless them.  ‘And the Lord spoke to Moses, saying:  “Speak to Aaron and his sons, saying, ‘This is the way you shall bless the children of Israel. Say to them: “The Lord bless you and keep you; The Lord make His face shine upon you; and be gracious to you; the Lord lift up His countenance upon you, and give you peace.” “So they shall put My name on the children of Israel, and I will bless them.”
Yeshua is the High Priest and it is He who puts God’s Name on us as we enter into His Renewed Covenant.  John 14:6: ‘Yeshua said to him, “I am the way, the truth, and the life. No one comes to the Father except through Me.’
Blessings in the Hebrew life are paramount in our connection with Elohim. Where many prayers are asking; a blessing offers praise, reverence, love and obedience to God, rather than to us in a petition.
We send our offerings of praise to Him in the form of a blessing, which is likened to the twelve tribes bringing their gifts to the altar in Numbers 7. ‘This was the dedication offering for the altar from the leaders of Israel, when it was anointed: twelve silver platters, twelve silver bowls, and twelve gold pans.’ Numbers 7:84. Hebrews 13:15 speaks to us to continue to offer up praises to God.
The Torah portion Naso tells of the Biblical past, our present today and the future. It was a covenant God then, it is a covenant God now and it will be a covenant God for ever.
Genesis 17:7 ‘"I will establish My covenant between Me and you and your descendants after you throughout their generations for an everlasting covenant, to be God to you and to your descendants after you.’
Jeremiah 32:40 "I will make an everlasting covenant with them that I will not turn away from them, to do them good; and I will put the fear of Me in their hearts so that they will not turn away from Me.
Psalm 105:8 ‘He has remembered His covenant forever, The word which He commanded to a thousand generations.
Psalm 105:10 ‘Then He confirmed it to Jacob for a statute, To Israel as an everlasting covenant.’
Psalm 111:5 ‘He has given food to those who fear Him; He will remember His covenant forever.’
Psalm 111:9 ‘He has sent redemption to His people; He has ordained His covenant forever; Holy and awesome is His name.’
Isaiah 55:3 "Incline your ear and come to Me. Listen, that you may live; And I will make an everlasting covenant with you, According to the faithful mercies shown to David.’
Baruch HaShem ~ Rabbi Jay