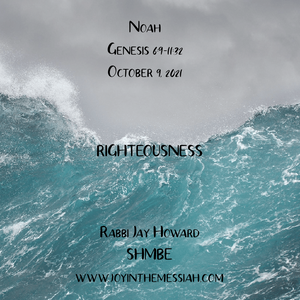 Besides creation, this parsha – Noach – is perhaps the second most well know Biblical ‘story’.  Ask almost anyone about the Flood, and you will get an array of opinions and answers, but all will have heard or have studied about Noah and the Ark.  This history is often easily under scrutiny. For instance: how could a 600-year-old man build a huge ark? Would the animals come on their own and no one would stop them? How could they survive in that ark? Food? Waste? Drinking water? Why would God need to undo creation to respond to the failures of a generation?
Genesis 6:11 states that ‘The earth was corrupt before God…’ Notice that we are told that the earth was corrupt before God, not in the sight of man.  As man is swallowed up in his own lawlessness, he becomes oblivious to the lawlessness.  Verse 6:11 in the Hebrew reads: V’atimahley ha’aretz chamas’  (And the earth was filled with violence).
The truth becomes the lie and the lie becomes the truth. People equate violence with only physical actions, but any lie is considered evil, and any half-truth is really a lie. Therefore any substance rather than substance from Adonai is a lie.
Proverbs 6:16-19  ‘There are six things that the Lord hates, seven that are an abomination to Him: haughty eyes, a lying tongue, and hands that shed innocent blood, a heart that devises wicked plans, feet that make haste to run to evil, a false witness who breathes out lies, and one who sows discord among brothers.’
Proverbs 12:22 ‘Lying lips are an abomination to the Lord, but those who act faithfully are His delight.’
Revelation 21:8 ‘But as for the cowardly, the faithless, the detestable, as for murderers, the sexually immoral, sorcerers, idolaters, and all liars, their portion will be in the lake that burns with fire and sulfur, which is the second death.’
But there was a man during this time of the flood and demolition that ‘found favor with God’. We are told that Noach was righteous, blameless and walked with God.  God reveals to Noach that He will establish His covenant with him, and that He will destroy the earth as Noach knew it.
Finding favor with God seems to be a lost concept in the realm of Christianity. The teachings are that everyone now has favor due to grace. Favor has become obsolete; we don’t need it because we already have it due to the death and resurrection of (Jesus) Yeshua.
But is that true? Yes, we are covered with His grace, that is a free gift from Him to us, but favor is different.  Our own physical children we cover with our unconditional love and grace. But the child that obeys us will find favor; a thank-you, a special treat, no punishment; rather than disobedience which would render them ‘in trouble’ and facing consequences.  We still love them without question, but at that moment of disobedience there is no favor.  Why would a parent reward bad behavior? Yeshua does the will of His Father, thus He is given favor.
Favor can have different meanings; to be accepted, to receive blessings or gain approval. Moses found favor, Exodus 33:12-13, those that walk blameless find favor and honor, Psalm 84:11. The angel Gabriel told Miriam in Luke 1:30 that she had found favor in the eyes of God. Yeshua finds favor in Luke 2:52 as He grew in wisdom.
Judges 6:17 ‘Gideon said to Him, If now I have found favor in Your sight, then show me a sign that it is You Who talks with me.’
Ruth 2:13 ‘Then she said, "I have found favor in your sight, my lord, for you have comforted me and indeed have spoken kindly to your maidservant, though I am not like one of your maidservants.’
Psalm 5:12 ‘Surely, LORD, you bless the righteous; you surround them with your favor as with a shield.’
When reading this parsha, we see that Noach did not question the commands of Adonai, rather: ‘Noah did everything just as God had commanded him” (6:22). “And Noah did all that the Lord had commanded him” (7:5). He brought pairs of animals into the ark “as God had commanded Noah” (7:9, 16). Noah is the absolute of biblical obedience. He does as he is commanded. One of the strangest features of biblical Hebrew is that – despite the fact that the Torah contains 613 commands – there is no word for ‘obey.’ Instead the verb the Torah uses is shema/lishmoa, ‘to listen, hear, attend, understand, and respond.’ So distinctive is this word that, in effect, the King James Bible had to invent an English word: ‘hearken.’  Shema! To listen to God! This alludes to the very fact that if one listens to the voice of God one would then automatically obey, for how arrogant it would be for man to listen to the voice and will of God and then turn away unto their own voice, will and ego.
This parsah continues with the God’s covenant that He made with Noach in Genesis 9. This chapter also tells of the curse of Caanan, which comes because of his disobedience towards his earthly father.  Genesis 10 begins the table of Nations and this parsha, Noach ends with the tower of Babel.
Obedience and favor are linked together as one unit. Neither was cast aside. 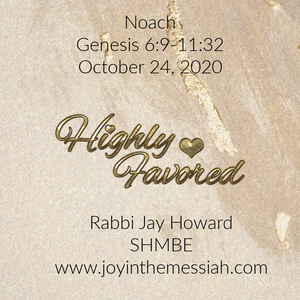 Living Waters and the Illuminating Light…

We are all familiar with the story of Noah and the flood.  God instructs Noah to build an ark by giving him complete and exact dimensions. Seven of each clean and two of each unclean animals were to be brought inside the ark. The rains would cover the earth because: ‘ God said to Noah, “The end of all flesh has come before Me, for the earth is filled with violence through them; and behold, I will destroy them with the earth.’ Genesis 6:13.
Two prominent connections in this parsha are light and water and we know Yeshua is both.
In regards to the light Genesis 9:16 states:‘ You shall make a window for the ark, and you shall finish it to a cubit from above…’ The Hebrew word for window in this sentence is tzohar. There is some confusion in understanding what exactly "tzohar" means, since the word does not appear anywhere else in Scripture. Everyone agrees that it is referring to a light, a source of illumination. The tzohar is what will give light within the ark itself, even in the darkness. But what exactly was it? Some say this was a window and would relate to tzahorayim meaning midday, therefore the light would come from the sun, and others say that it was a precious stone that would illuminate. This latter view relates tzohar to zohar ‘radiance’ which suggests something that radiates its own light, hence the idea of a miraculous precious stone. Another view is that Noah had both.
This light, this radiance was to guide Noah by day and by night. Without any light to guide us, we become lost, afraid and lose our way.
Psalm 27:1 ‘Of David. The Lord is my light and my salvation; whom shall I fear? The Lord is the stronghold of my life; of whom shall I be afraid?’
Psalm 119:105 ‘Your word is a lamp to my feet and a light to my path.’
1 John 1:5 ‘This is the message we have heard from Him and proclaim to you, that God is light, and in Him is no darkness at all.’
John 8:12 ‘Again Yeshua spoke to them, saying, “I am the light of the world. Whoever follows Me will not walk in darkness, but will have the light of life.”
Revelation 21:23 ‘And the city has no need of sun or moon to shine on it, for the glory of God gives it light, and its lamp is the Lamb.’
Proverbs 6:23 ‘For the commandment is a lamp and the teaching a light, and the reproofs of discipline are the way of life.’
In regards to the water, we read in Genesis 7:11: ‘ In the six hundredth year of Noah’s life, in the second month, the seventeenth day of the month, on that day all the fountains of the great deep were broken up, and the windows of heaven were opened. 12 And the rain was on the earth forty days and forty nights.’
From this passage, we come to the conclusion that the water destroyed life as it was.  It destroyed the wickedness that was on the face of the earth.  However, it also birthed new life, a new beginning. This is true of when we receive the living waters.  Our old self, our old wickedness dies and we are allowed to rebirth a new creation.
Ephesians 4:24 ‘And to put on the new self, created after the likeness of God in true righteousness and holiness.’
2 Corinthians 5:17 ‘Therefore, if anyone is in Messiah, he is a new creation. The old has passed away; behold, the new has come.’
God breathed life into the waters, just as He breathes life into us.
Job 26:10 ‘He has inscribed a circle on the face of the waters at the boundary between light and darkness.’
Genesis 1:1-5 ‘ In the beginning God created the heavens and the earth. 2 The earth was without form, and void; and darkness was on the face of the deep. And the Spirit of God was hovering over the face of the waters.3 Then God said, “Let there be light”; and there was light. 4 And God saw the light that it was good; and God divided the light from the darkness. 5 God called the light Day, and the darkness He called Night. So the evening and the morning were the first day.’
God refers to Himself as the Living Waters:
Jeremiah 17:13  'Those who depart from Me shall be written in the earth because they have forsaken the Lord, the fountain of LIving waters.'
John 4:10 ‘Yeshua answered her, “If you knew the gift of God, and who it is that is saying to you, ‘Give me a drink,’ you would have asked Him, and He would have given you living water.”
John 7:38 ‘Whoever believes in Me, as the Scripture has said, ‘Out of his heart will flow rivers of living water.’
Water is the key to survival and plays many important roles in the body including flushing waste from the body, regulating body temperature, transportation of nutrients and is necessary for digestion. Up to 60% of the human adult body is water. According to H.H. Mitchell, Journal of Biological Chemistry 158, the brain and heart are composed of 73% water, and the lungs are about 83% water. The skin contains 64% water, muscles and kidneys are 79%, and even the bones are 31 % water.
Besides sunlight giving the human body much needed levels of vitamin D, the sun triggers the release of hormones in your brain. Exposure to sunlight is thought to increase the brain’s release of a hormone called serotonin, which is associated with boosting mood and helping a person feel calm and focused.
Water and light: Yeshua. 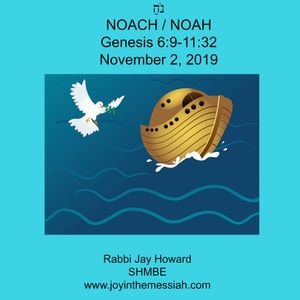