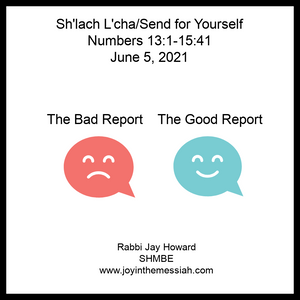 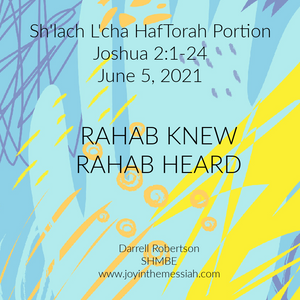 One of the greatest failures of leadership was that of the 10 spies.  In Numbers 13:1 God commanded Moshe to send out 12 men to spy the land.  This was not for God’s benefit, but rather for theirs. Moses in Numbers 13:3, choose leaders rather than just men of the tribes: ‘all of them men who were heads of the children of Israel.’ These men had great responsibility not only in leading the Israelites, but that of continuing to show the strength that was with them because of Adonai. Ten of the spies whom Moses sent came back with a report that could possibly demoralize the nation.
‘Then they told him, and said: “We went to the land where you sent us. It truly flows with milk and honey, and this is its fruit. 28 Nevertheless the people who dwell in the land are strong; the cities are fortified and very large; more over we saw the descendants of Anak there. 29 The Amalekites dwell in the land of the South; the Hittites, the Jebusites, and the Amorites dwell in the mountains; and the Canaanites dwell by the sea and along the banks of the Jordan.” 30 Then Caleb quieted the people before Moses, and said, “Let us go up at once and take possession, for we are well able to overcome it.”31 But the men who had gone up with him said, “We are not able to go up against the people, for they are stronger than we.” 32 And they gave the children of Israel a bad report of the land which they had spied out, saying, “The land through which we have gone as spies is a land that devours its inhabitants, and all the people whom we saw in it are men of great stature. 33 There we saw the giants (the descendants of Anak came from the giants); and we were like[i] grasshoppers in our own sight, and so we were in their sight.” Numbers 13:27-33.

This was absurd and they all should have known it. For it wasn’t so long ago that they sang; “Who is like You, O Lord, among the gods?
Who is like You, glorious in holiness,
Fearful in praises, doing wonders?
12 You stretched out Your right hand;
The earth swallowed them.
13 You in Your mercy have led forth
The people whom You have redeemed;
You have guided them in Your strength
To Your holy habitation.
14 “The people will hear and be afraid;
Sorrow will take hold of the inhabitants of Philistia.
15 Then the chiefs of Edom will be dismayed;
The mighty men of Moab,
Trembling will take hold of them;
All the inhabitants of Canaan will melt away.”Exodus 15:11-15.

What would possess these 10 leaders to bring back a negative report?  It would cost them in the end, for only Joshua and Caleb among their generation lived to enter the land, Numbers 14:30. It was these two among the twelve that showed leadership, that gave hope. They told the people that the conquest of the land was achievable because God was with them. However, the people did not listen, and instead turned on them again, and were ready to stone Moses and Aaron, Numbers 14.  Once again, Moses interceded on behalf of the people.
Numbers 14:36 ‘Now the men whom Moses sent to spy out the land, who returned and made all the congregation complain against him by bringing a bad report of the land, 37 those very men who brought the evil report about the land, died by the plague before the Lord. 38 But Joshua the son of Nun and Caleb the son of Jephunneh remained alive, of the men who went to spy out the land.’
Our hope, Tikvatenu:
Psalm 31:24 ‘Be strong and let your heart take courage, all you who hope in the Lord.’
Psalm 130:7 ‘O Israel, hope in the Lord; for with the Lord there is lovingkindness, and with Him is abundant redemption.’
Romans 12:12 ‘…rejoicing in hope, persevering in tribulation, devoted to prayer…’
Psalm 42:5 ‘Why are you in despair, O my soul? And why have you become disturbed within me? Hope in God, for I shall again praise Him for the help of His presence.’
Why is hope so powerful?  Hope renews faith, hope gives clarity, hope propels us, hope gives optimism, and hope strengthens trust. Hope in people can and will waiver, hope in current affairs will surely cast doubt, and hope in our finances can dwindle. But hope in Adonai is ever present and the constant stabilizer that we all need. By coming back with an evil report, the 10 spies were almost able to void a nation of all hope. Those that say, “I can’t” probably can’t. But for those who say “I can” probably will.  "I can do all things through Yeshua which strengthens me. He can rise superior to every condition through the strength that Messiah gives." Philippians 4:13. Because of the courage and steadfastness of Joshua and Caleb, the hope of God pressed on.
“For the dead and the living, we must bear witness.” Elie Wiesel.
“If we bear all this suffering and if there are still Jews left, when it is over, then Jews, instead of being doomed, will be held up as an example.” Anne Frank.
‘For nearly a year, Herzberger struggled to survive the daily routine terrors and psychological torture in three of Adolph Hitler’s concentration camps. She served as a “corpse gatherer,” resisted the lure of suicide, and relied on God for the hope to outlive the Nazi death machine. In her silent moments in the camp as she prayed, she knew in her heart that God could help her make it out alive.’ The biography of Magda Herzberger taken from her home in 1944 at the age of eighteen.
“Hatikvah” began its life as a nine-stanza Hebrew poem entitled “Tikvatenu” (“Our Hope”). Its author was a 19th-century Hebrew poet, Naftali Hertz Imber (1856-1909), from Złoczów, a town in Austro-Hungarian Galicia. Inspired by the Hibbat Zion movement of early Zionism, he wrote the poem in 1878 while living in Jassy (Yash), Romania.  The melody was written by Samuel Cohen, an immigrant from Moldavia. 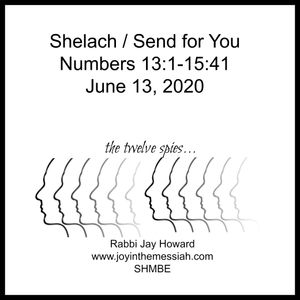 This Torah portion follows B’ha’alotcha which contained the murmuring of Miriam. B’ha’alotcha began with the Light and ended with a darkness; the darkness of leprosy. In that Torah portion, we remember the verse Numbers 11:4 where it states that ‘the mixed multitude’ began to miss their prior lifestyle in Egypt. This complaining infected the camp as a very bad influence, and toxicity. This seems to carry through into Sh’lach and continues into Korach.
Sh’lach begins with a command from God ‘to send’. Did God need spies? Was He unaware of what the land looked like or its inhabitants?  Or was this too a test for the people? We understand more when we read Deuteronomy 1:21-22 where Moses is recounting the journey:  'Look, the Lord your God has set the land before you; go up and possess it, as the Lord God of your fathers has spoken to you; do not fear or be discouraged.’

22 “And every one of you came near to me and said, ‘Let us send men before us, and let them search out the land for us, and bring back word to us of the way by which we should go up, and of the cities into which we shall come.’
This chapter in Deuteronomy continues with Moses telling the entire story and rebuking the Israelites.  Through this recollection we understand that the people wanted to send the spies, it was not God’s idea, for they did not trust The Lord and lacked faith.
Continuing with Numbers 13:1-2, God agrees to send the men, and declares that it is a gift. ‘And the Lord spoke to Moses, saying, 2 “Send men to spy out the land of Canaan, which I am giving to the children of Israel; from each tribe of their fathers you shall send a man, everyone a leader among them.”
In this verse it is clear that God is giving them the land. This is not happenstance or going to be a huge battle without God for He states that He is giving it to them. That declaration right there should have given the spies, and all the children of Israel the supreme confidence in God that they were about to acquire the land, regardless of who was living there at that time.
Numbers 13 continues with the spies bringing back an abundance of fruit, and the report of the land certainly flowing with milk and honey.  When Caleb suggests that they go and take the land, (remember this was land God was giving them) the other spies, excluding Joshua, rebuke Caleb and bring the children of Israel to a dead stop as they bring the ‘bad report’. Numbers 13:31-33.
Do we often ignore the free gift of Covenant that God offers us? Do we need spies? Do we listen to bad reports? Proverbs 12:26 states: ‘The righteous is a guide to his neighbor, but the way of the wicked leads them astray.’ Ephesians 4:29:  ‘Let no corrupting talk come out of your mouths, but only such as is good for building up, as fits the occasion, that it may give grace to those who hear.’
Numbers 14 continues this dialog between Caleb and Joshua and the remaining spies. The toxic influence is so bad that the Israelites whine to die! ‘If only we had died…’ Numbers 14:2. And then they continue to fault God in Numbers 14:3.
When Caleb and Joshua stand up for the land, God and the plan, the Israelites raise stones to kill them, Numbers 14:10.  First they wanted to die themselves, now they are willing to kill these two men.  Moses intercedes upon the behalf of the people after God declares that He has had enough and He is willing to smite them all.
Numbers 14 continues with a death sentence for the rebellious ones, 14:26-36 and a futile presumptuous invasion attempt in Numbers 14:37-45 which results in the Israelites being driven back.
Numbers 15 contains the laws for the grain and drink offerings, where we see the word for challa in Numbers 15:18-21, specifically the English word ‘cake’ in verse 20 which is a translation of the Hebrew word “challah”  חלה. How remarkable that our tradition of challa dates back to this.
Numbers 15 also contains the laws for unintentional and intentional sin: Numbers 15:30 ‘But the person who does anything presumptuously, whether he is native-born or a stranger, that one brings reproach on the Lord, and he shall be cut off from among his people. 31 Because he has despised the word of the Lord, and has broken His commandment, that person shall be completely cut off; his guilt shall be upon him.’ ”
God calls the sin presumptuous, which is exactly what the Israelites did in Numbers 14:44, they presumed: ‘But they presumed to go up to the mountaintop. Nevertheless, neither the ark of the covenant of the Lord nor Moses departed from the camp. 45 Then the Amalekites and the Canaanites who dwelt in that mountain came down and attacked them, and drove them back as far as Hormah.’
James 4:17 refers to the intentional sin, ‘Therefore, to him who knows to do good and does not do it, to him it is sin.’
Sh’lach ends with the importance of Sabbath and tzizit. The Sabbath in Jewish mindset is referred to as a queen, which we usher in. It is a Covenant of God and the fourth commandment. The Sabbath is an integral part of the Hebrew way of life. It is presumptuous to not honor the Shabbat and it is negating creation when the Sabbath is void. It is a sign between God and His people, Ezekiel 20:12, Exodus 31:13 and is referred to as a Moadim, an appointed time of God in Leviticus 23:3.
May you be blessed as you study Sh’lach!
Baruch HaShem ~ Rabbi Jay 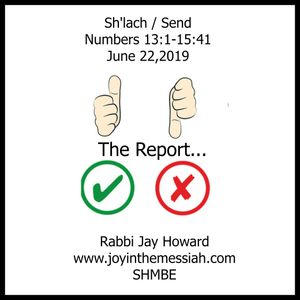