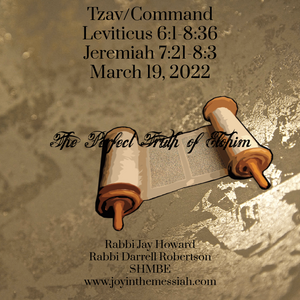 The Perfect Truth of Elohim… 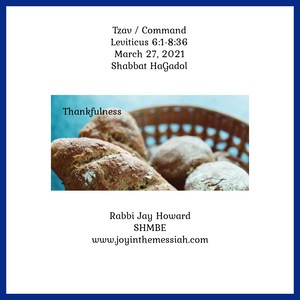 Tzav continues with the regulations of the Levitical system and the duty of keeping the perpetual fire burning on the altar. This is the Ner Tamid – the Eternal Light. Today, this is a light that is placed above the Ark in synagogues worldwide. This is also considered Shabbat HaGadol, The Great Sabbath. It is the Sabbath before Pesach, and it is also taught that the 10th of Nisan in the year of the Exodus was a Sabbath.
Combing these two, Shabbat HaGadol and the Ner Tamid, we see redemption and light. Redemption was a pivotal part of the Great Exodus – they were released from bondage, redeemed to God to serve Him His way. Today, when we come into the ways of God we are redeemed to worship Him His way – not the ways of a Hellenistic system which He with great Divine wisdom and word, frees us from.
Tzav is translated as Command – which is different than the other parshas where they start out with ‘God spoke…’. The word command signals an urgency of utmost importance, it is non debatable and without options. Tsav begins with command for obedience and ends with obedience, ‘So Aaron and his sons did everything the LORD commanded through Moshe. Leviticus 8:36.

Also in this week’s Torah portion there is a type of peace offering in Leviticus 7:11- ‘This is the law of the sacrifice of peace offerings which he shall offer to the Lord.’  It is Shlamim in Hebrew and is known as the thanksgiving sacrifice.  The sages teach that this sacrifice was given after experiencing a special miracle. For Ramban, the offering of thanksgiving at such exceptional times reminds us that all times are exceptional. We know that God’s intervention in the supernatural should give one a sense of God’s involvement in the everyday. For example, from the splitting of the sea, an event in which God was so obviously the creator of such a grand and awesome miracle, one should come to recognize the input of God every day, just by observing the oceans and the never-ending tides.
Nehama Leibowitz said: “the unusual deliverances and outstanding miracles are there merely to draw our attention to the miracle of existence.”
The idea that the natural is supernatural, deserving our gratitude is found in the Dayenu sung at the Seder. Some think Dayenu deals with our telling God that we have had enough suffering. In reality the song says the reverse. We say to God, had You only performed but a fraction of the larger miracle, it would have been enough. Dayenu is the great statement of thanks to God. The fact that the thanksgiving sacrifice is a type of peace offering is of great import. When giving to God, the human being achieves a level of inner peace. This is because love is not only a function of receiving, but also of giving.
Leviticus 7:11-14 states: ‘This is the law of the sacrifice of peace offerings which he shall offer to the Lord: 12 If he offers it for a thanksgiving, then he shall offer, with the sacrifice of thanksgiving, unleavened cakes mixed with oil, unleavened wafers anointed with oil, or cakes of blended flour mixed with oil. 13 Besides the cakes, as his offering he shall offer leavened bread with the sacrifice of thanksgiving of his peace offering. 14 And from it he shall offer one cake from each offering as a heave offering to the Lord. It shall belong to the priest who sprinkles the blood of the peace offering.’

This is the Torah portion before Pesach. This parsha, Tsav, is so important to our lives today as there are lessons for us regarding the offerings and the blood, all of which are a huge part of Passover.
How would we offer an offering today?  We would have to look into the spiritual side rather than the physical side to receive the instructions that will bring the blessings from YHWH.
The beginning of Tsav, the Lord explains the concept of sin.  ‘And the Lord spoke to Moses, saying: 2 “If a person sins and commits a trespass against the Lord by lying to his neighbor about what was delivered to him for safekeeping, or about a pledge, or about a robbery, or if he has extorted from his neighbor, 3 or if he has found what was lost and lies concerning it, and swears falsely—in any one of these things that a man may do in which he sins: 4 then it shall be, because he has sinned and is guilty, that he shall restore what he has stolen, or the thing which he has extorted, or what was delivered to him for safekeeping, or the lost thing which he found, 5 or all that about which he has sworn falsely. He shall restore its full value, add one-fifth more to it, and give it to whomever it belongs…’Leviticus 6:1-5.
When we sin against our neighbor, we actually sin and commit a trespass against the Lord. David reiterates this in 2 Samuel 2:13. These are trespasses that leave us unconnected to God. This can result in unanswered prayers.  God always hears the prayers of the broken, the prayers of repentance and the prayers of praise.  But would He respond to the prayers of want if we were in transgression and remaining in sin with a haughty attitude?
To breach against the brothers and sisters, is to breach against God.  Our offerings today will be the spiritual praise and the obedience that we offer to the Torah.  We obey the Word of God because we don’t question Him. To question His authority regarding His instructions might be a sign of arrogance.
Also in this parsha is the prohibition against eating blood. Leviticus 7:26-27 ‘Moreover you shall not eat any blood in any of your dwellings, whether of bird or beast. 27 Whoever eats any blood, that person shall be cut off from his people.’ ”
This is not just one prohibition among others. The ban on eating blood is fundamental to the Torah and continues in the Brit Chadasha for the Life is in the blood.  This also is central in the covenant God makes with Noah  and through him, all of humanity  after the Flood in Genesis 9:4. : “But you must not eat meat that has its lifeblood still in it”.  Moses also repeats this command in Deuteronomy 12:23-24- ‘But be sure you do not eat the blood, because the blood is the life, and you must not eat the life with the meat. You must not eat the blood; pour it out on the ground like water. Do not eat it, so that it may go well with you and your children after you, because you will be doing what is right in the eyes of the Lord.’
God uses the same wording when He speaks of idolatry and blood. These are the sins that He sets His face against us:
Leviticus 17:10 ‘I will set My face against that person who eats blood and will cut him off from his people.
Leviticus 20:5 ‘I will set My face against that man [who engages in Moloch worship] and his family and will cut him off from his people.’
This is so interesting that God tells His people that He will set His face against us for the consumption of blood and the sin of idolatry.
The life line is in the blood, it is the blood of the lamb, from the One who came by water and blood as is stated in 1John 5:6 ‘This is He who came by water and blood—Yeshua; not only by water, but by water and blood. And it is the Spirit who bears witness, because the Spirit is truth.’
Matthew 26:27-28 ‘Each of you drink from it, for this is my blood, which seals the covenant between God and his people. It is poured out to forgive the sins of many.’
Acts 20:28 ‘Keep watch over yourselves and all the flock of which the Holy Spirit has made you overseers. Be shepherds of the church of God, which He bought with his own blood.’
Exodus 12:13 ‘'The blood shall be a sign for you on the houses where you live; and when I see the blood I will pass over you, and no plague will befall you to destroy you when I strike the land of Egypt.
1 John 2:2 ‘…and He Himself is the propitiation for our sins; and not for ours only, but also for those of the whole world.’
1 John 5:8 ‘…the Spirit and the water and the blood; and the three are in agreement.
Hebrews 12:24 ‘…and to Yeshua, the mediator of a Renewed Ccovenant, and to the sprinkled blood, which speaks better than the blood of Abel.’
As we study Tsav and the review of offerings to God, may our offerings  be sweet , so rightly said in the Brit Chadasha.
Philippians 4:18 ‘But I have received everything in full and have an abundance; I am amply supplied, having received from Epaphroditus what you have sent, a fragrant aroma, an acceptable sacrifice, well-pleasing to God.
Ephesians 5:2 ‘Therefore be imitators of God as dear children. 2 And walk in love, as Christ also has loved us and given Himself for us, an offering and a sacrifice to God for a sweet-smelling aroma.’    Baruch Hashem~ 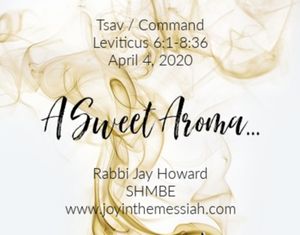