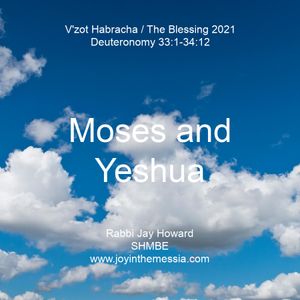 זֹאת הַבְּרָכָה
V’zot HaBracha / The Blessing
Deuteronomy 33:1-34:12
HafTorah Joshua 1:1-18
Brit Chadasha
The last day of Moses’ life was anything but peaceful. As he wrote the last of Devarim, he challenged the people of Israel, warning them just as they were getting ready to cross the Jordan and enter the promised land; there he foretold of the challenges ahead and how they would turn from God’s Covenant.  He warned them that their challenges would not come from scarcity but abundance, not slavery but rather their freedom and not being guided by God, but by now guiding themsleves. Right up to the very end of his life, he continued to challenge both the people and God.
As Moses goes to the top of Pisgah, across from Jericho, the Lord showed him the whole land and ‘Then the Lord said to him, “This is the land I promised with an oath to Abraham, Isaac, and Jacob. I said I would give it to their descendants. I have let you see it with your own eyes, but you may not go there.’ Deuteronomy 34:4. Before this great ending, Moses blesses each individual tribe, with word of truth and encouragement, Deuteronomy 33.
Is this not so unlike the last days of Yeshua?  The last of His life was also anything but peaceful. As he entered into His last days, He too, challenged the people, warning them of tribulations, yet encouraging them and blessing them.
In Matthew 5:1-12, Yeshua blesses His people, yet with a strict warning, that they/we will be insulted and persecuted. He continues with, ‘Do not think that I came to destroy the Law or the Prophets. I did not come to destroy but to fulfill. 18 For assuredly, I say to you, till heaven and earth pass away, one jot or one tittle will by no means pass from the law till all is fulfilled. 19 Whoever therefore breaks one of the least of these commandments, and teaches men so, shall be called least in the kingdom of heaven; but whoever does and teaches them, he shall be called great in the kingdom of heaven.’
As Moses did in his ending speech to Israel, Yeshua warns the people of trials to come.  In Matthew 24, He tells of the distress to come, the abomination of desolation (spoken by the prophet Daniel) and the coming of the Son of Man.
Yeshua references Moses in John 5:46, admonishing the people that: ‘For if you believed Moses, you would believe Me, because he wrote about Me.’ Likewise, Moses references Yeshua in Deuteronomy 18:15-18 ‘The Lord your God will raise up for you a Prophet like me from your midst, from your brethren. Him you shall hear, 16 according to all you desired of the Lord your God in Horeb in the day of the assembly, saying, ‘Let me not hear again the voice of the Lord my God, nor let me see this great fire anymore, lest I die.’ 17 “And the Lord said to me: ‘What they have spoken is good. 18 I will raise up for them a Prophet like you from among their brethren, and will put My words in His mouth, and He shall speak to them all that I command Him.’
These two tie the Scriptures into one. Some would like to separate the two, as they do in the Scriptures, but they are connected. Even unto death. ‘Now after six days Jesus took Peter, James, and John his brother, led them up on a high mountain by themselves; 2 and He was transfigured before them. His face shone like the sun, and His clothes became as white as the light. 3 And behold, Moses and Elijah appeared to them, talking with Him.’ Matthew 17:1-3.

These last two chapters of Deuteronomy are considered the farewell blessings of Moshe. He demonstrates the greatness of compassion at the end of his life as he blesses the very people that so often crossed him.
The book of Deuteronomy/Devarim repeats the blessings of God if/when we obey His word. V’zot HaBerachah continues with Moshes blessing each tribe almost individually and yet as a whole.
This Sabbath is also the Shmenini Atzeret, Joy in the Torah, (Rabbinical) and it is the Great Eighth Day. This day ends the season of Sukkot, the time of harvest, joy and the time of the Messiah’s birth. This eighth day is a holy day, not separated from Sukkot ‘Then the Lord spoke to Moses, saying, 34 “Speak to the children of Israel, saying: ‘The fifteenth day of this seventh month shall be the Feast of Tabernacles for seven days to the Lord. 35 On the first day there shall be a holy convocation. You shall do no customary work on it. 36 For seven days you shall offer an offering made by fire to the Lord. On the eighth day you shall have a holy convocation, and you shall offer an offering made by fire to the Lord. It is a sacred assembly, and you shall do no customary work on it.’ Leviticus 23:33-36.
Nehemiah 8:18 also mentions the eighth day: "Also day by day, from the first day unto the last day, he [Ezra] read in the book of the law of God. And they kept the feast seven days; and on the eighth day was a solemn assembly."
By the time of Yeshua, a water libation ceremony had become part of the tradition of the festival. This was called the “Simchat Beit Hashoavah” – the water-drawing festival. The priests would go down to the pool of Siloam in the City of and they would fill a golden vessel with the water there. They would go up to the temple, through the Water Gate, accompanied by the sound of the shofar, and then they would pour the water so that it flowed over the altar, along with wine from another bowl. This would begin the prayers for rain in earnest, and there was much rejoicing at this ceremony. On the last or "great" day of the feast, the pouring of water reached its climax. The priests circled the altar seven times and then poured out the water with great pomp and ceremony. This was Hoshana Rabbah, the great "HOSHIANA," (which translated is "save now").
We find a significant mention of Hoshana Rabbah in the book of John 7:37-38 where Yeshua makes a profound reference to the Great Eighth Day -‘ On the last day, that great day of the feast, Yeshua stood and cried out, saying, “If anyone thirsts, let him come to Me and drink. 38 He who believes in Me, as the Scripture has said, out of his heart will flow rivers of living water.”
The concept of Living Water is a central theme in the Scriptures:
Isaiah 12:2-3 ‘Behold, God is my salvation; I will trust, and will not be afraid;
for the Lord God is my strength and my song, and he has become my salvation.”
With joy you will draw water from the wells of salvation.”
Revelation 7:16-17 ‘They shall hunger no more, neither thirst anymore; the sun shall not strike them, nor any scorching heat. For the Lamb in the midst of the throne will be their shepherd, and he will guide them to springs of living water, and God will wipe away every tear from their eyes.”
Revelation 22:17 ‘The Spirit and the Bride say, “Come.” And let the one who hears say, “Come.” And let the one who is thirsty come; let the one who desires take the water of life without price.”
John 4:14 ‘But whoever drinks of the water that I will give him will never be thirsty again. The water that I will give him will become in him a spring of water welling up to eternal life.”
Zechariah 13:1 ‘“On that day there shall be a fountain opened for the house of David and the inhabitants of Jerusalem, to cleanse them from sin and uncleanness.
Zechariah 14:8 ‘On that day living waters shall flow out from Jerusalem, half of them to the eastern sea and half of them to the western sea. It shall continue in summer as in winter.’
There is never a coincidence with God.  It is not coincidence that we are to partake and observe the joy of the season of Sukkot.  It is not a coincidence that water became a central theme.  It is not a coincidence that Yeshua was born during this season, and it is not a coincidence that He calls it out – that He is the Living Water.
His people miss so much when they deny the feasts of the Lord, Leviticus 23.
Baruch HaShem!

וְזֹאת הַבְּרָכָה
Vezot HaBerachah / And This is the Blessing
Deuteronomy 33:1-34:12

This is the last chapter of Deuteronomy/Devarim and the last chapter of the Torah, the teachings and instructions of God.  Just as Genesis/ Bereshith ends with Jacob imparting a blessing to his twelve sons from his death bed; Moshe imparts a blessing to the children of Israel before his death in Deuteronomy 33:1-34:12. After all the rebellion and attacks, he still leaves the people with a blessing.
What were at one time twelve brothers now has become a nation of people about to enter the Promised Land with HaTorah, the directions of becoming and maintaining the perfect way of Elohim. The Will of God.
This is the season to dwell in booths in order to remind us of the forty year wilderness journey of our ancestors.  This is another symbol of YHWH’s covering over us, that reminds His people that God sent His Son to Tabernacle with us so as to gather His bride under the chuppa for the wedding in order to worship Him and pray with the Holy Spirit, the Ruach HaKodesh which is the spiritual covering.
In Deuteronomy 33:26-29 Moshe encourages the people with hope of God’s greatness.
‘There is no one like the God of Yeshurun, who rides on the heavens to help you and on the clouds in His majesty. The eternal God is your refuge and underneath are the everlasting arms. He will drive out your enemies before you saying, “Destroy him!” So Israel will live in safety alone; Jacob’s spring is secure in a land of grain and new wine where the heavens drop dew. Blessed are you O Israel. Who is like you, a people saved by the Lord? He is your shield and helper and your glorious sword. Your enemies will cower before you and you will trample down their high place.’
Vezot HaBerachah is the conclusion of a family who was bound to go into Egypt to serve Egypt as a nation of slaves in the bondages of Egypt for 400 years. This is such a clear representation of spiritual death. However, the Israelites are delivered from slavery, becoming a nation to serve God and His Torah, which is clearly Life. This is the parsha in which the children of God enter into the Promised Land.
To quote the Etz Chayim Torah and Commentary:  “In synagogues, we complete the Torah and proceed in two directions. First, we go back to the opening words of Genesis and we begin thinking new insights on every page, not because the Torah has changed, but because we have changed since we read it a year ago.  And then, in the HafTorah for Simchat Torah we go forward into history to read of Joshua’s leadership of the people after the death of Moses.”
Vezot HaBerachah ends with ‘and for all the great might and awesome power that Moses displayed before all Israel.’  These are the words in which we complete the Torah. Devarim ends with the Israelites as a nation, on the banks of the Jordan River, about to begin their most profound journey – that of showing the very will of Elohim, the Torah into every life.
Baruch HaShem!  Rabbi Jay Howard

Chazak! Chazak! V’nitchazek!  Be Strong! Be Strong! And May We Be Strengthened! 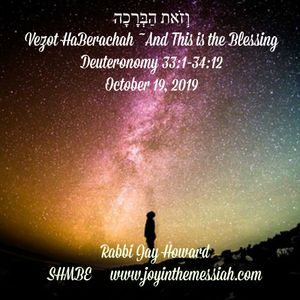