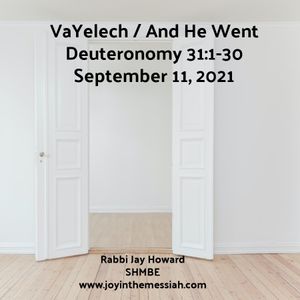 The end of Moses journey was near. He had prayed to God, not to live longer, but just to ‘…go over and see the good land beyond the Jordan.’ But God had answered, ‘No, that is enough. Do not speak to Me anymore about this matter.’ Deuteronomy 3:25-26.
Accepting this, he issued two last instructions to the people of Israel. These were the last of the 613 right rulings, two that were to have significant consequences for the future of the people of Israel.
The first is known as Hakhel, the command for the king to summon the people to gather during Sukkot every shemittah (seventh) year.  Deuteronomy 31:9-13. The most famous of this type of ceremony was the national gathering ordered by Ezra and Nehemiah after the second wave of returnees from Babylon in Nehemiah 8-10. Ezra stood by one of the gates to the Temple and read the Torah to the people. The people then “bound themselves with a curse and an oath to follow the Law of God given through Moses the servant of God and to obey carefully all the commands, regulations and decrees of the Lord our Lord” Nehemiah 10:29.
But Moshe prefaces this command with very profound declarations: that God Himself will cross over before them, disposing of the nations, Deuteronomy 31:3-4, and not only does he tell the people to be strong and courageous, but he reiterates that to Joshua. Deuteronomy 31:6 and Deuteronomy 31:7.
Adonai speaks this into the life of Joshua after the death of Moshe in Joshua 1:1-9.  “…Have I not commanded you? Be strong and of good courage; do not be afraid, nor be dismayed, for the Lord your God is with you wherever you go.” (Joshua 1:9).
To be strong and courageous. Are we? Or do we sink behind the fear of what is coming. Do we murmur about the times we live in? Do we make up rapture dates so that we don’t have to face the trials? Do we lead others through fear and ignorance? God forbid.
Isaiah 41:10 ‘Fear not, for I am with you; be not dismayed, for I am your God; I will strengthen you, I will help you, I will uphold you with My righteous right hand.’
2 Timothy 1:7 ‘For God gave us a spirit not of fear but of power and love and self-control.’
1 John 4:18 ‘There is no fear in love, but perfect love casts out fear. For fear has to do with punishment, and whoever fears has not been perfected in love.’
Isaiah 41:13 ‘For I, the Lord your God, hold your right hand; it is I who say to you, “Fear not, I am the one who helps you.”
Psalm 27:1 ‘Of David. The Lord is my light and my salvation; whom shall I fear? The Lord is the stronghold of my life; of whom shall I be afraid?’
Psalm 23:4 ‘Even though I walk through the valley of the shadow of death, I will fear no evil, for you are with me; your rod and your staff, they comfort me.’
Philippians 4:6-7 ‘Do not be anxious about anything, but in everything by prayer and supplication with thanksgiving let your requests be made known to God. And the peace of God, which surpasses all understanding, will guard your hearts and your minds in Messiah.’
Matthew 10:28 ‘And do not fear those who kill the body but cannot kill the soul. Rather fear Him who can destroy both soul and body in hell.’
Psalm 118:6 ‘The Lord is on my side; I will not fear. What can man do to me?’
John 14:27 ‘Peace I leave with you; my peace I give to you. Not as the world gives do I give to you. Let not your hearts be troubled, neither let them be afraid.’
Romans 8:15 ‘For you did not receive the spirit of slavery to fall back into fear, but you have received the Spirit of adoption as sons, by whom we cry, “Abba! Father!”
The last of Moshe’s imparting words begin at the end of this parsha, Deuteronomy 31:19. The ending of Vayelech, Deuteronomy 31: 30 ‘Then Moses spoke in the hearing of all the assembly of Israel the words of this song until they were ended…’ will continue in Ha’azinu.

נִצָּבִים
Nitzavim/ You Are Standing
Deuteronomy 29:9-30:20
וַיֵּלֶךְ
VaYeilech / And He Went
Deuteronomy 31:1-30

וַיֵּלֶךְ
Vayeilech / And He Went
Deuteronomy 31:1-30

Vayeilech is the briefest parsha in the Torah, and happens at a crucial time in the Israelites’ journey .  After forty years of God speaking the Word to Moses and then Moses to the people, the Word of God is now to be written down. Deuteronomy 31:24. ‘So it was, when Moses had completed writing the words of this law in a book, when they were finished, 25 that Moses commanded the Levites, who bore the ark of the covenant of the Lord, saying: 26 “Take this Book of the Law, and put it beside the ark of the covenant of the Lord your God, that it may be there as a witness against you…’
One of the most amazing details of Vayeilech are the differences regarding  the Israelites’ future. Words vary from encouraging to negative: the people will do well and succeed and they will also go after other gods and fail.
Even though the Word of God is now in the form of a teaching which is the Torah and a poem which is shirah; Moses does not believe and God surely knows that the written text of the Word will not ensure the continued loyalty and steadfastness of obedience of the people.  It is important to note that the instruction to the people to “hear and learn” in Deuteronomy 3:13 is for all the people; adults and children, Israelites and foreigners; they are all included. Not only that, the Torah, the instructions and teachings of God are absolutely meant for generations to come as well, even those “who have not had the experience” of being in a time of ‘face to face’ which is in Deuteronomy 31:13. This is a truly sobering thought.
Vayeilech begins with: ‘YHWH Your Elohecha (The Lord your God) Himself, will cross over before you and He Himself will wipe out those nations from your path and you shall dispossess them.’ Deuteronomy 31:3.
Moshe is stating a very biblical concept. That it is God who will set the stage of victory and that it is God Himself that is the decisive factor in conquering the land – IF – the people go with Him in faith and obedience to His instructions and His appointed leaders. Deuteronomy 31:6 continues with: ‘Be strong and of good courage, do not fear nor be afraid of them for YHWH Elohecha He is the One that goes with you. He will not leave you or forsake you.’
This is repeated in Hebrews 13 as the author continues with exhortation.
Hebrews 13:1-6 ‘Keep on loving one another as brothers and sisters. 2 Do not forget to show hospitality to strangers, for by so doing some people have shown hospitality to angels without knowing it. 3 Continue to remember those in prison as if you were together with them in prison, and those who are mistreated as if you yourselves were suffering. 4 Marriage should be honored by all, and the marriage bed kept pure, for God will judge the adulterer and all the sexually immoral. 5 Keep your lives free from the love of money and be content with what you have, because God has said, “Never will I leave you; never will I forsake you.” 6 So we say with confidence, “The Lord is my helper; I will not be afraid. What can mere mortals do to me?”
However, this promise runs parallel with how much we stay with Him or if  we wander and serve other gods, which will have us suffer the consequences in the prior Torah portions, Ki Tavo and Nitzavim.
Deuteronomy 28:1-2 ‘Now it shall be, if you diligently obey the LORD your God, being careful to do all His commandments which I command you today, the LORD your God will set you high above all the nations of the earth. "All these blessings will come upon you and overtake you if you obey the LORD your God…’
Deuteronomy 30:2 ‘and you return to the LORD your God and obey Him with all your heart and soul according to all that I command you today, you and your sons…’
Deuteronomy 30:9-10 ‘Then the LORD your God will prosper you abundantly in all the work of your hand, in the offspring of your body and in the offspring of your cattle and in the produce of your ground, for the LORD will again rejoice over you for good, just as He rejoiced over your fathers; if you obey the LORD your God to keep His commandments and His statutes which are written in this book of the law, if you turn to the LORD your God with all your heart and soul.’
The Scriptures continue:
Psalm 55:2 ‘Cast your burden on the Lord, and he will sustain you; he will never permit the righteous to be moved.’
1 Chronicles 28:20 ‘Then David said to Solomon his son, “Be strong and courageous and do it. Do not be afraid and do not be dismayed, for the Lord God, even my God, is with you. He will not leave you or forsake you, until all the work for the service of the house of the Lord is finished.’
It is impossible to have one without the other. We cannot have peace and protection if we serve other gods. We may assume and feel that we are protected and that our life is perfect, but we are in a chaos zone, so much so that we may not even notice it. It is then that God exhorts us to:
Joel 2:13 ‘And rend your heart and not your garments " Now return to the LORD your God, For He is gracious and compassionate, Slow to anger, abounding in lovingkindness And relenting of evil.’
Hosea 14:1 ‘Return, O Israel, to the LORD your God, For you have stumbled because of your iniquity.’
Zechariah 1:3 ‘"Therefore say to them, 'Thus says the LORD of hosts, "Return to Me," declares the LORD of hosts, "that I may return to you," says the LORD of hosts.’
May you be blessed as you study Vayeilech and prepare for the High Holy Days.
Rabbi Jay Howard 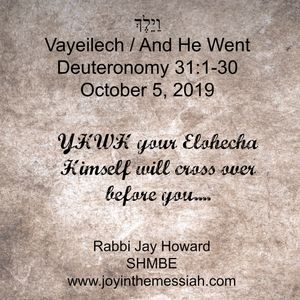