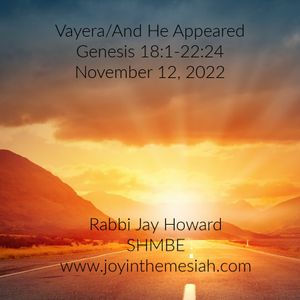 The Torah…
In this Torah portion, God appears several times in one situation or another where people either see Him or they do not.
In Genesis 18 Abraham is visited with the presence of God, and in Genesis 22:4 Abraham sees the pillar of fire with the Shekinah of God upon Mount Mariah but the servants traveling with Abraham did not.
In Genesis 21:9 Hagar has her eyes opened to the well of water that God has provided her. Whether the well was dug many years before her travail or it was placed there miraculously at that moment, it was all part of God’s plan.
By these three examples, we see the difference of how God appears to those that He chooses to appear to.  His substance, His appearance, the message of His voice, and attributes are all found in the Torah, especially His strength.
The strength of God is visual to all of us as it was visual to the Israelites and neighboring tribes at that time. We first witness His strength in creation. We see His strength with Noah, and with Abraham. We witness His strength with Moshe and Joshua. We see and feel His strength with and through Yeshua.
The strength of Adonai comes through His word, His breath, His voice, His commandments – His Torah.
The sages teach that "Bereishit": "With (or by way of) 'reishit', God created the Heavens and the Earth". "Reishit" means Torah. God created the world with the Torah. God looked into the Torah and created the world."
What a powerful and profound declaration. It is also taught in a Midrash that: "For the sake of the Torah, which they [Israelites] were destined to receive, for 'Your strength' here is but a designation for the Torah, as in the passage; 'The Lord will give strength unto God's people' Psalm 29:11.  In Psalm 29:11, “strength” is transformed from a divine wonder observed by the Israelites at the Sea, into a gift bestowed by God to the Israelites for the future. More than a source they summoned at need; God would convey God’s strength to them in Torah.
Job 12:16 ‘With Him are strength and sound wisdom, the misled and the misleader belong to Him.’
Psalm 93:1 ‘The Lord reigns, He is clothed with majesty; the Lord has clothed and girded Himself with strength; indeed, the world is firmly established, it will not be moved.’
Psalm 96:6 ‘Splendor and majesty are before Him, strength and beauty are in His sanctuary.’
Jeremiah 50:34 ‘Their Redeemer is strong, the Lord of hosts is His name; He will vigorously plead their case so that He may bring rest to the earth, but turmoil to the inhabitants of Babylon.’
Exodus 15:13 ‘In Your lovingkindness You have led the people whom You have redeemed; in Your strength You have guided them to Your holy habitation.’
Luke 1:51 ‘He has done mighty deeds with His arm; He has scattered those who were proud in the thoughts of their heart.’ 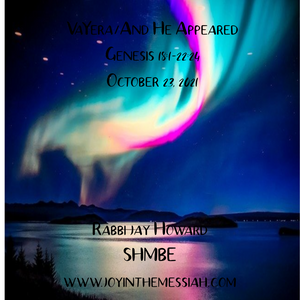 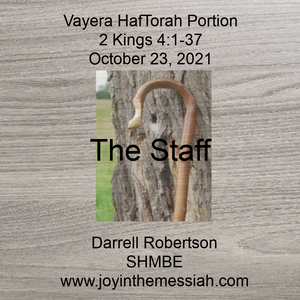 Do We See?
Vayera – and appeared to Him, YHWH was seen. In one instance or another within this parsha, people either see God as He appears in a multitude of ways, or they do not.

Throughout Scripture there are a multitude of verses where God appears to people in many forms; fire, wind, breath, voice, dreams, smoke, voice and other people. Most importantly, He appears in and through His Word.  Are we truly seeing the words?
Words can be read with the truth, with agendas, with perception, with opinion and with doubt. Words can mean one thing to someone and another to someone else. Words can be twisted, profound, daring, comforting and frightful. Words can heal, words can hurt. Words can lie and words can speak truth.
When we read and study the words of God today, are we truly seeing the truth or are we twisting them to our own agenda causing our eyes to not see the true God? If so, then He is not appearing to us in His way – the truth – but rather in our way. We are then seeing the version of a god that we created.
As we start at the foundation we see that Gods Word is The Truth.

Yeshua being the Living Word/the Living Torah we can see how it is connected, it is the truth  that is the Torah.

We hear the true voice: Psalm 76:8, Mark 1:11, Acts 11:9, John 10:27.
We feel the true God: Jeremiah 29:13, 1 John 4:12, Acts 17:28, Psalm 16:11.
We see God: Job 12:7-10, Psalm 19:1-4, Romans 1:20
But when we listen to the voice of chaos, when we try to see the wicked, when we allow ourselves to feel and live in the ways of the world, we are deny ourselves the comfort and truth that is God and His Word.
This parsha is a great lesson for us as we read about Lot’s wife in Genesis 19:26. Despite having been warned not to look back, Lot’s wife looked back anyway, and was immediately turned into a pillar of salt. It was not only a fatal act of disobedience, but an example to be avoided for all time. The second shortest verse in Scripture is Luke 17:32 and has just three words: Remember Lot’s wife!  This is Yeshua warning His people: “In that day, he who is on the housetop, and his goods are in the house, let him not come down to take them away. And likewise the one who is in the field, let him not turn back. 32 Remember Lot’s wife.’ Luke 7:31-32.
We are not to look back into the past of disobedience, but rather we are to see God and His Word. We are to move forward into His Ways.  We see God not only in the world around us, but also in His Moadim. Do we see God in the pagan holidays that man has created? Or do we see a god that man created?
Parallels we can see between Isaac and Yeshua:

May we truly see, feel and hear the voice of The Lord in our lives. 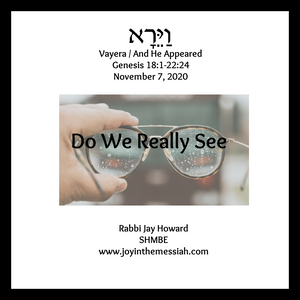 In this Torah portion, God appears several times. In one situation or another, people are involved with either seeing or not seeing The Almighty, which is the case in our lives as well.
In Genesis 21:9 Hagar has her eyes opened to the well of water that YHWH has provided her. Whether the well was dug many years before her travail or it was placed there miraculously at that moment, it was all part of God’s plan.
In Genesis 18 Abraham is visited with the very presence of God, and in Genesis 22:4 Abraham sees the pillar of fire with the Shekinah of YHWH upon Mount Mariah while the servants traveling with Abraham did not.
By these three examples, we see the difference in the case of the appearance of God.  In the case of Abraham, he was obedient even unto the possible death of his son, and he was the most humble as explained in Genesis 18:2 ‘He ran to the tent door to meet the and bowed to the ground’.
Can we make a connection between humility and one seeing the will of God?  We can see through the Scriptures that the more humility the more connection we will have with God.

Psalm 119:21 ‘You rebuke the proud—the cursed, who stray from Your commandments.’
Psalm 10:4 ‘The wicked in his proud countenance does not seek God; God is in none of his thoughts.’
Psalm 138:6 ‘Though the Lord is on high, yet He regards the lowly; but the proud He knows from afar.’
Proverbs 16:5 ‘Everyone proud in heart is an abomination to the Lord; though they join forces, none will go unpunished.’
God appeared to Abraham in Genesis 12:7, 17:1, 18:1. God appeared to Jacob, Joseph, Moses and Aaron. God appeared to Rabbi Shaul, Gideon and Manoah and his wife and Solomon. God appeared to Hannah, Mirian and Joseph.
God appears in fire, breath, smoke and wind, dreams and visions, even a hand. He appears as a burning bush, thunderings, lightnings and a thick darkness. God appears as a voice, a lamp and a smoking furnace. .
God also appears to us through His Word, His written Word; the Torah and through His Son, which is the Word incarnate.  Through humility, we seek His Word, His Way, and His Walk.
But when God does appear to us, what is our responsibility? Responsibility is our responsibility.  It is to be responsible to The Call of God.  Adam and Eve lacked responsibility as they blamed the serpent and one another, even blaming God.  Others have lacked responsibility as well; Cain lacked moral responsibility, and Joseph’s brothers lacked family responsibility.
We have the responsibility to first hear the call of God, acknowledge it and then act upon it.  Often we don’t, but instead we ponder the call, sift through it, judge it and see if it will fit into our lifestyle.  But that is placing our judgment equal to if not above the Call of God, which lacks humility.

James 4:10 ‘Humble yourself before the Lord and He will lift you up.’ 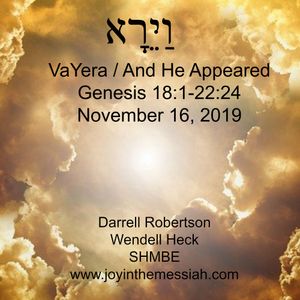